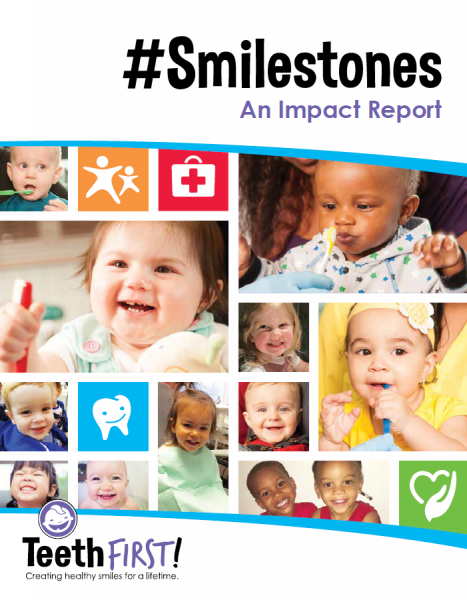 At TeethFirst!, we believe that early dental visits put children on a path to healthy smiles for a lifetime, and that it’s never too soon for dentists and families to team up – making a child’s first teeth a priority from the start. We believe that great healthcare requires a team of people working together to keep our little ones healthy.

To reach parents and families directly, TeethFirst! worked with ad agency GLAD WORKS and developed #Smilestones, a bilingual PSA and awareness campaign cleverly packaged as a photo contest on social media. The goal was to boost awareness of TeethFirst! as a resource, and highlight the importance of early childhood oral health by encouraging parents and families to share pictures of their children practicing healthy dental habits. Since building a healthy smile is a lifelong journey that starts in infancy, we wanted to highlight the important milestones along the way (we branded these milestones #Smilestones). Examples of #Smilestones include Gummy Smiles, Teething, My First Teeth, Lost My First Tooth, My First Toothbrush, My First Dental Visit, and more.

#Smilestones was launched in April with a cheerful announcement e-newsletter that was sent to our oral health network and was followed by a steady stream of organic, viral, and paid social media posts. Biweekly blog posts about individual #Smilestones and a television segment were also implemented to keep the campaign from becoming static.

As a result of these strategies, #Smilestones bilingual campaign posts were viewed over 95,000 times in Rhode Island (almost 10% of the entire state population) on Facebook, Twitter, and Instagram and generated 6,200 engagements, 107 photo submissions, 25 photo winners, and a 470% increase of web traffic to the TeethFirst! website.